Iraq-wide:
Security officials in provinces across Iraq praised the effectiveness of respective security plans supporting the Eid al-Adha holiday, with most officials somewhat accurately claiming no major security incidents were experienced.  IS activity during this period developed largely as anticipated.  The organization was able to effectively execute just one high-impact attack, with six PMF members killed and seven individuals wounded during a suicide bombing southeast of Shirqat on the night of 21 August.  The bulk of activity comprised upticks in IED attacks and other routine forms of asymmetric attacks in active environments of the Northern Region, and to a lesser extent in Anbar and Baghdad.

The tempo of IS claims pertaining to confirmed and unconfirmed attacks remains elevated as the organization seeks much-needed propaganda victories for its supporters.  Meanwhile, security postures have begun returning to normal levels.  Travel restrictions implements in the Tarmiyah District of Baghdad were rescinded.   As discussed in the original threat assessment for Eid al-Adha, the period following the holiday will remain dangerous as IS seeks to exploit reductions in security measures.   Security officials cited the importance of mantaining security for individuals returning from the Hajj in Saudi Arabia, particularly those travelling through southern Anbar towards Karbala.

Kurdistan Region:
Routine Turkish strike activity was reported in border areas of the KR-I.  On 24 August, Turkish Air Force aircraft and Turkish Army artillery targeted suspected PKK positions in multiple areas of the Sidakan Sub-District in northern Erbil Province.  On 26 August, Turkish Air Force aircraft conducted airstrikes against suspected PKK positions near Beduhe Village, located in the Amedi District of northern Dohuk. No casualties were confirmed in either of these events. The Turkish Chief of Staff claimed airstrikes killed three PKK militants in the Avashin – Basiyan region of northern Iraq.  In other border activity, one Kolbar was killed and three others were wounded due to the explosion of a legacy landmine near Balikdar Village, located east of Sulaymaniyah.

Although Eid was largely peaceful in the KR-I, locally motivated violence was highlighted in Sulaymaniyah.  On 25 August, a Sulaymaniyah hospital spokesman stated that 35 individuals were wounded during brawls over the course of Eid in Sulaymaniyah. Two others sustained gunshot wounds, and 11 others sustained knife wounds. On 26 August, dozens of teachers conducted a gathering outside Laila Qassem School near Kalar Bazaar. Protestors called for reductions in fees at the Bahashti Kalar Compound. Limited reports added that Asayish forces prevented journalists from covering the protest.

North:
On 26 August, an unnamed security source reported that the nephew of the Shabak PMF Commander and Iraqi MP Haneen al-Qadu, along with one of his associates, shot and wounded a civilian at a fuel station near Topzawa Village in Bartella, northeast of Mosul.  Few further details were noted.  It is unclear if these accounts served as additional details for a previous report.  On the morning of 23 August, a dispute at a fuel station escalated into a physical altercation near Bashiqa Town.  ISF responded, firing into the air in an attempt to control the situation.  No casualties were initially reported.  In any event, the situation will continue to be monitored for any additional signs of tensions in these eastern Suburbs of Mosul.

Additional details surfaced pertaining to a set of CF-supported security operations south of Mosul.  On the morning of 25 August, ISF including the Nineveh Police SWAT Battalion, supported by CF fixed-wing aircraft, launched a search operation for IS militants in Maghar Valley of Shura Sub-District, south of Mosul.  The Security Media Center claimed CF aircraft targeted a 7km long cave or tunnel complex after being cordoned by ISF, reportedly killing 10 IS militants.   According to the Nineveh Operations Command, the operation was launched in response to information citing the infiltration of insurgents from Syria.  Additional operations were conducted in the area the following day, with an unspecified number of tunnels, staging areas, and legacy IEDs destroyed.

Further details of claimed CF airstrikes will be discussed once official reporting is released.  There is an extant potential for inflated casualty figures for airstrikes affecting underground IS facilities.  That said, this operation clearly garnered significant attention, and very possibly removed a significant IS safe haven used to threaten adjacent environments between Qayyarah and Hammam al-Alil.  The impact on IED and direct fire activity levels along this corridor will be important to monitor for in the weeks following this notable security success, with cautious optimism in play for positive shifts.

Similar strike priorities were noted further south.  On 25 August, the Security Media Center announced that Iraqi Army Aviation spotted and destroyed two IS staging areas in the Siniyah Desert, west of Baiji.   The sites reportedly contained logistics equipment, a likely legacy vehicle borne IED, an ammunition container, and a number of mortar rounds.  Meanwhile, security forces continue to conduct routine arrest operations in Mosul, with at least four individuals detained in reporting on 25 August.  The bulk of incidents continuing to focus on individuals accused of historic IS involvement.

Diverse low-level activity was reported in Kirkuk Province.  On 25 August, an IED detonated in Mansouriyah Village in Multaqa, southwest of Kirkuk.   One civilian was killed.  At 21:00 on 25 August, an unidentified gunman riding a motorcycle shot and wounded an employee of the Iraqi Drilling Company in the Azadi area of Iskan neighborhood of Kirkuk City.  This incident illustrates the enduring potential for individuals associated with the oil and gas sector to be exposed to routine violence likely motivated by personal disputes.

On 25 August, the Security Media Center announced that acting on intelligence information, Federal Police Intelligence units arrested an IS logistics official in an unspecified area of the Hawija Sector.  The insurgent was planning to target security forces and power transmission towers using IEDs. Based on the detainee’s confession, intelligence detachments discovered a staging area in an abandoned home containing 12 IEDs and various IED materials in Kanaan Village, located in southern Hawija District.  It is unclear if this small but notable security success will have on IS threats influential to electrical infrastructure in particular, with the bulk of recent targeting concentrated in suburbs west of Kirkuk.

On the night of 25 August, according to unidentified sources in social media reporting, IS abducted a civilian identified as Mohammed Radhi Hameed at a fake checkpoint in an unspecified area of the Baghdad – Kirkuk Highway (Highway 2). The abducted individual is from the Khadra area of Kirkuk City. Additional confirmation is required from more credible sources, with initial accounts assessed to stem from an IS-affiliated media outlet.  While far from the scale of headlining attacks involving fake checkpoints in July and previous months, these accounts illustrate persistent IS intent to threaten the security of this major commercial route.  Associated patterns will continue to be closely monitored for any further signs of shifts in threat levels. 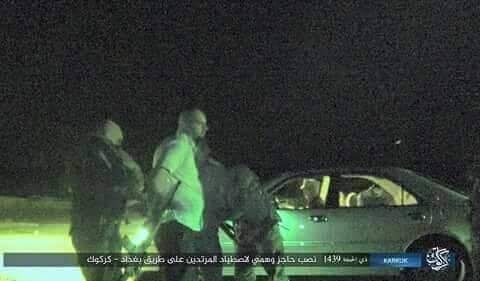 In eastern Anbar, unnamed security sources discussed the arrests of two suspected IS members.  On 25 August, a security source stated that security forces conducted a search and raid operation in Hayy al-Shuhada, southern Fallujah City.  ISF reportedly arrested two well-known wanted individuals on terrorism charges.  The individuals were suspected of involvement in previous attacks against security forces.  Additional reporting from another unnamed source claimed the individuals were found possessing PMF IDs, a large sum of money, and other official documents.

Activity in Baghdad was largely limited to low-level direct fire and IED incidents.  On the afternoon of 25 August, a security source stated that unidentified gunmen using suppressed weapons shot and killed an individual in Sadr City, East Baghdad.  On 26 August, ISF found the body of an unidentified man bearing gunshot wounds in Hor Rajab, southwest Baghdad.  Security forces remain alert in the aftermath of Eid.  On 26 August, an unnamed security source state that security forces searched an abandoned vehicle as a suspected vehicle-borne IED on the Ruba’I Street in Zayuna area in East Baghdad.  EOD personnel ultimately found no evidence of explosives.

On 26 August, Rusafa Health Director Qasim Abd al-Hadi stated that a total of 105 children were injured during Eid al-Adha Holiday due to mishandling toy guns. It noteworthy that security forces in Baghdad and the Southern Region issued warnings against the sale of toy guys due to the dangers they pose to children.

South:
On the evening of 25 August, a number of activists from Baghdad arrived in Basra in order to support the sit-in occurring in Basra City.  The individuals were reportedly assaulted by security forces near al-Maqil Railway Station in an effort to obstruct their participation in these events.  One activist identified as Ali Mahna was allegedly beaten and arrested.  An elderly female was also injured. These events form the latest illustration of heavy-handed security measures used to suppress unrest in Basra.  As seen to varying extents in other active areas of the Southern Region, the involvement of Baghdad residents is indicative of persistent solidarity.

On 26 August, Basra Provincial Council Security Committee head, Jabar al-Saadi, stated that security forces controlled a tribal clash in Imam al-Qaim Sub-District in northern Basra. No casualties were reported.  This incident forms the fourth direct fire incident described as occurring in areas of northern Basra Province since 22 August, with each said to have been motivated by tribal disputes.  Most incidents were indicative of targeted killings, with at least three fatalities reported thus far.  Additional violence may continue to be seen in historically active environments over the near-term.

Basra officials continue to discuss large numbers of illnesses caused by polluted water supplies. On 26 August, Basra Health Department Director, Riyad Abdul Amir, stated that Basra hospitals received more than 10,000 cases of illnesses caused by polluted water supplies over an unspecified period.  This included vomiting, stomach cramps, nausea, and diarrhea.  The official claimed water supplies in 70% of the province was unfit for consumption.  Amir criticized a statement made by the Minister of Water Resources who denied issues with water salinity levels in Basra, and denied signs of a cholera outbreak. The Ministry of Water Resources also downplayed the number of individuals affected by water-borne diseases in the province.

As with other shortfalls in public services in Basra, these issues prominently illustrate the impact of shortfalls associated with highly centralized economic control at the federal level.  Officials at all levels will remain challenged to treat the symptoms of these endemic shortfalls without meaningful attempts to decentralize economics and governance between federal and provincial levels.  Increases in associated unrest remain possible in Basra, particularly now that Eid al-Adha commemorations have come to a close.