On the evening of 17 August a weapons depot belonging to the Abbas Brigade of the Hashd al-Shaabi detonated on the Sharia Road west of Karbala. Casualty figures varied widely, with claims of no injuries by PMF officials to as many as 15 killed in unconfirmed local reporting. Limited imagery of this event underlined the remote location of the site itself, which likely served to mitigate more substantial casualties. Additional security is likely to remain in place within the area over the near term.

In line with previous incidents, initial claims from Abbas Brigade leaders stated that the site was targeted by an airstrike or other “hostile act”. One commander of the Abbas Division, Maytham Abbas claimed that the detonation occurred in an empty warehouse, with only three boxes of weapons without ammunition which were left as an “ambush”. He added that the detonation was conducted by an outside actor and claimed that no casualties resulted from the blast. If images depicting the blast are confirmed however, the size of the detonation is indicative of a far more significant amount of munitions being present at the site. Additional claims said PMF defenses observed two UAVs over the scene of the incident, with confirmation that the UAVs are “not friendly.”

Despite such claims, the incident bares the hallmarks of previous munitions storage site detonations which have resulted from high temperatures and inadequate safety precautions being employed. The most recent events have involved the Abbas Brigade specifically, and include a munitions detonation on 10 August which impacted the 26th Hashd al-Shaabi Brigade, an Abbas Division unit, in the Lake Razazza area, west of Karbala. An even more significant detonation at another site belonging to the Abbas Division occurred northeast of Karbala on 6 August, which wounded five individuals. The organization’s statements alleging a hostile act have become an expected response, most likely forming an effort to save-face in the aftermath of repeated incidents. 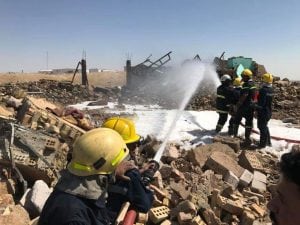 Similar incidents have been reported periodically throughout the summer, with varying degrees of impact and severity to surrounding populations. This incident comprises at least the 10th munitions cache detonation reported on a national basis since the start of June, all of which have been ultimately attributed to poor storage precautions and high temperatures.

While such events have been seen periodically on a historic basis, the rise of the PMF and munitions accumulated by other security-related forces during the fight against IS, have resulted in a significant amount of stockpiling which falls outside of government oversight and basic standards for storage. Following one explosion in the heart of Baghdad’s Sadr City which left at least 22 dead and over 90 wounded on 6 June, many PMF elements removed more substantial storage locations outside of residential areas, though this may also have impacted the ability to supply effective storage measures.

Commercial and humanitarian operations have been largely unaffected as a direct result of such events, though operations should remain aware that many weapons storage locations are not easily or officially identified. Locations with a more significant security contingent, or storage locations identified as belonging to security elements are more likely to see munitions being stored, particularly in areas of PMF presence and non-government backed security forces.